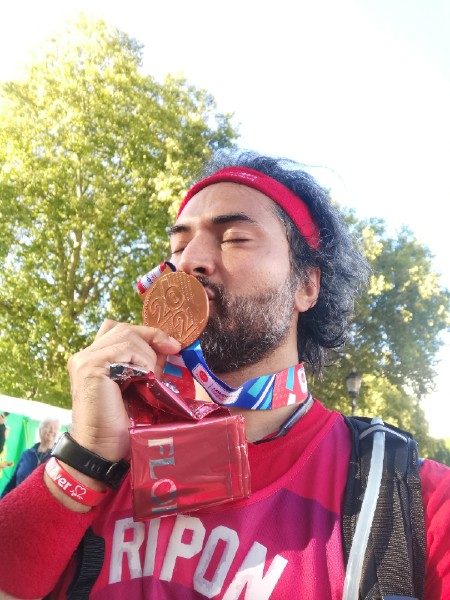 Back in 2018, I was walking out of a London Underground station when I suffered a cardiac arrest at the age of 37. Strangers gave me CPR and used a defibrillator, helping to save my life.

I awoke from an induced coma at St. Barts Hospital five days later. I had no memory of the cardiac arrest and when my friends and family were visiting me in hospital, and my partner Fiona was explaining what had happened to me, I still found it difficult to process.

I had a blockage of the left atrium from a blood clot which led to my heart stopping. Prior to the event, I was in the shape of my life: I was training in Brazilian Jiu Jitsu and Muay Thai six times a week, I went running every other day and my diet was great. I also had no genetic history of heart disease.

“So why has this happened to me?” I kept asking the cardiologists.

“It’s just one of those things.” Was the response.

Since it was unsure at the time on whether there was an underlying issue that caused the cardiac arrest, the cardiologists told me that there was a chance that I may never be able to run again, and fight sports was out of the question. I had two stents which were keeping my left atrium open, and with it also came several heart medications, some of which cause me to bruise very easily.

When I was discharged from hospital, I was advised to walk two minutes and try to build that time up by a minute each day. I genuinely couldn’t believe the advice I was being given, “I was running ten km just seven days ago, how dare you belittle me with a two-minute walk!” I thought angrily to myself. I will prove everyone wrong.

When I got home, I walked up five steps to get to the toilet and I felt like my rib cage had been stamped on. I was completely out of breath and panicking as a result which didn’t help. I kept telling myself it was probably a result of all the drugs I was pumped with to keep me in my induced coma; once they ware off, I’ll be back to normal.

The next day, I was adamant I would be walking, possibly running 10km. After two minutes of walking, I had to sit down on a park bench and get my breath back. I walked back home and passed out for eight hours from exhaustion. Again, I tried to convince myself it was the drugs, but the next day I walked three minutes, had to sit down on the park bench and when I got home, I passed out for ten hours. Reality was hitting home very hard.

During my rehabilitation, I had accepted that I couldn’t do many of the things I did pre the cardiac arrest, or if I could, I would have to make many changes both mentally and physically to the way I go about things. Here are some of the things that helped me:

If the cardiac arrest taught me anything, it is that life is too short to waste. Had I lost my life, I would not have been able to sort out my issues with my Father. We have a much better relationship now, and I realised that it gives me a peace of mind. So, I say to everybody, don’t be stubborn, contact people, phone them, whatever you need to do. Reach out to friends and family for support, they will be happy to help, and you will feel better with them around.

I also reached out to friends and was open about how vulnerable I felt. There was always a worry for me that I would suddenly drop dead; I had lost confidence in myself to take part in physical activity. Because I reached out, I had friends that would go running with me; this made me feel safe and was great for moral support. The steady steps towards running again were so great for my mental health. It helped me realise that there was a possibility I may get my fitness back, which for someone who had always been active, was great for my self-esteem.

My fall from my cardiac arrest also resulted in my hitting the concrete very hard. This caused a broken finger on my left hand and my right eye was completely swollen to the point I couldn’t see out of it properly for months. My broken finger meant I couldn’t play my guitar and my swollen eye made it difficult to read, both these activities being favourite pastimes of mine. So, I took up a few new skills to take my mind off things. I started playing the ukulele. There are fewer strings and it’s easier to play than a guitar, most importantly, I could play it without the use of my broken finger. I also took up juggling, which really helped with my focus, which at that point was non-existent. Proving that I could learn new things gave me a confidence that I could potentially relearn the things I used to love doing. This gave me a lot of hope.

The support I got from everyone around me was incredible. I was truly the luckiest person having the network of people that I had around me. Not everyone is that privileged. I wanted to support other people, so I set up an Instagram account @cardiacarresteddevelopment where I reached out to others living with heart disease and built up a network of people around the world to share tips and information on how to lead a better life after a heart related illness. It genuinely gave a me a sense of self worth to the point that it led me to train and complete the London Marathon 2021 and raise £3000+ for the BHF.

Every specialist I spoke to regarding my cardiac arrest made it very clear that the events that took place after my cardiac arrest were near impossible to repeat. Had everything not happened exactly as it did (bystanders finding me and administering CPR, the defibrillator being close by, the ambulance arriving etc.) then I would not have survived, or I could have permanent damage to brain function due to the lack of oxygen. When you dwell on all this, it is very difficult to keep your focus on the here and now. I booked sessions with a psychologist to deal with this. He advised that when my mind started to wander, I should use one of the five senses to bring me back to the present. For me, I used a small bottle of lavender which I carried in my pocket. Whenever I started to drift away, I would smell the bottle and be back in the present moment. You can do the same by focussing your eyes on a, vibrant object, like a red ball. But it helped me, and ultimately made me feel more connected with the people and world around me.

Having struggled to walk two minutes after leaving hospital in 2018, I have since had a child who is two years old, I have changed my career, I have relocated, I have become an ambassador for the BHF, I have run the London marathon, and recently I have started training back in both Brazilian Jiu Jitsu and Muay Thai.

After my cardiac arrest, I thought my life would never be the same again, which it isn’t. It is far better!